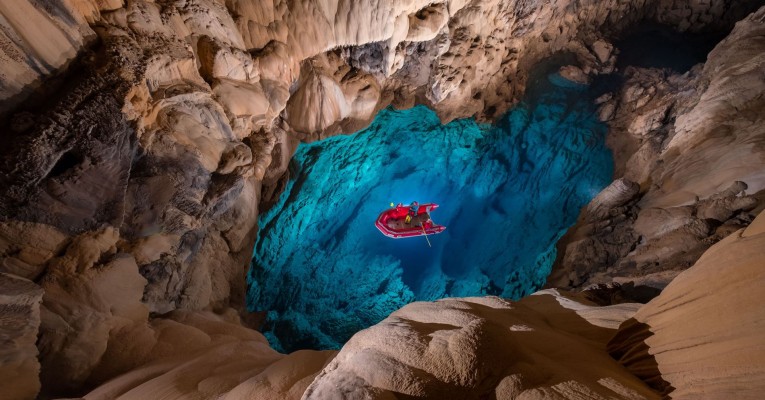 Dear friends, speleologists, cavers, and lovers of art photography, which are usually taken in extreme conditions – in the depths of Earth!

The announcement of results of the international contest in photography with the topic of caves and speleology – Speleofotografia 2020 (Speleophotography 2020) was realized in the town of Liptovský Mikuláš. This town, surrounded by mountains, is known also for presence of many of important caves, for instance the longest cave system of Slovakia – Demänová Cave System, as well as the deepest one – Hipmans´ Caves. That is also why a museum was established here in the past; a museum, which deals with the speleology as an integral part of nature protection. This year, the Slovak Museum of Nature Protection and Speleology commemorates the 90th anniversary, and at the same time this year is also the year of organizing the 20th year of the contest in photography – Speleofotografia 2020.

This year, because of Covid-19 pandemic measures, the results of the contest were announced without the public presence. On the one hand, we are a little sorry that we could not meet in person when announcing the results, but on the other hand, the main prizes are mostly awarded by foreign authors, who usually could not come such long way, so maybe you will be able to enjoy it better on-line. Perhaps thus has been arising a useful idea for next years, to organize the announcement of results on-line as well.

The results of contest were decided by the international jury composed of Pavol Kočiš from Slovakia, chairman of the jury, Marek Audy from Czech Republic, Cosmin Berghean from Romania, Daniel Lee from Russian Federation and by Pavol Staník from Slovakia – all of them members of the jury.

We are thankful not only to the jury, but also to the members of Organizing Committee – to Mr. Bohuslav Kortman, Michal Danko and Lukáš Vlček, which are members of the Slovak Speleological Society as well as to Mrs. Dagmar Lepišová from the Slovak Museum of Nature Conservation and Speleology.

This year, 42 photographers from 14 countries presented their works. They presented themselves again in two categories – Beauty of Caves and Speleomoment. They show not only the amazing details of the cave decoration and the beauty of the underground world, but also the moments from the discovery of caves and their exploration. In the photographs, the static motifs of inorganic nature change with the dynamics, which enter the caves together with their discoverers. In the catalogue, which you can browse virtually, there is a selection of the 100 most successful pictures, of which the contest jury awarded the following:

In the Category A – Beauty of Caves:

On the third place has been awarded the photography of Mr. Rainer Staub from Germany, named Deep Blue.

On the second place has been awarded the photography Reincarnation of Mr. Marek Csukás from the Czech Republic.

The first place belongs to the photography “Les racines du Paradis” (The Roots of Paradise) of Mr. Rémi Flament from France.

In the Category B – Speleomoment:

On the third place has been awarded the photography of Mr. Mark Burkey from the United Kingdom, named by name of the cave – Alum Pot.

The second place has been given again to the Mr. Rémi Flamment from France – this time for the photography named Eye for Eye.

The first place belongs to the photography Hyperspace Caver of Mr. Romain Venot from France.

Additionally, by the e-voting prize has been awarded the photography Maaras Cave of Mr. Christos Pennos from Greece.

The Grand Prize of the contest Speleofotografia 2020

has been awarded to the photography Gonvillars River, which was taken by Mr. Romain Venot from France, who has been awarded as well as for Hyperspace Caver on the first place in the contest category Speleomoment.

In conclusion, we warmly congratulate to the awarded photographers, to authors of the Top 100 photographs, which are published in the catalogue and we thank to all the participants of contest!

We are looking forward to You in the next photography contest with the topic of caves and speleology – Speleofotografia 2022 in two years!

on behalf of Organizing Committee